Our Associate Producer Aviva Lessard used to keep chickens when she was a university student and loved the experience. Here’s the story of her experience.

A year after I moved to Victoria, BC, my roommate and I decided we wanted to get chickens for our backyard. We had lots of space and were interested in raising birds for eggs, and also for fun. We checked the by-laws and learned that we were allowed to have up to 5 fowl – so long as none of them were roosters.

We borrowed a chicken coop from a friend, which turned out to be incredibly heavy and difficult to move. With the help of others, we managed to load it up onto a truck and plopped it into our backyard. 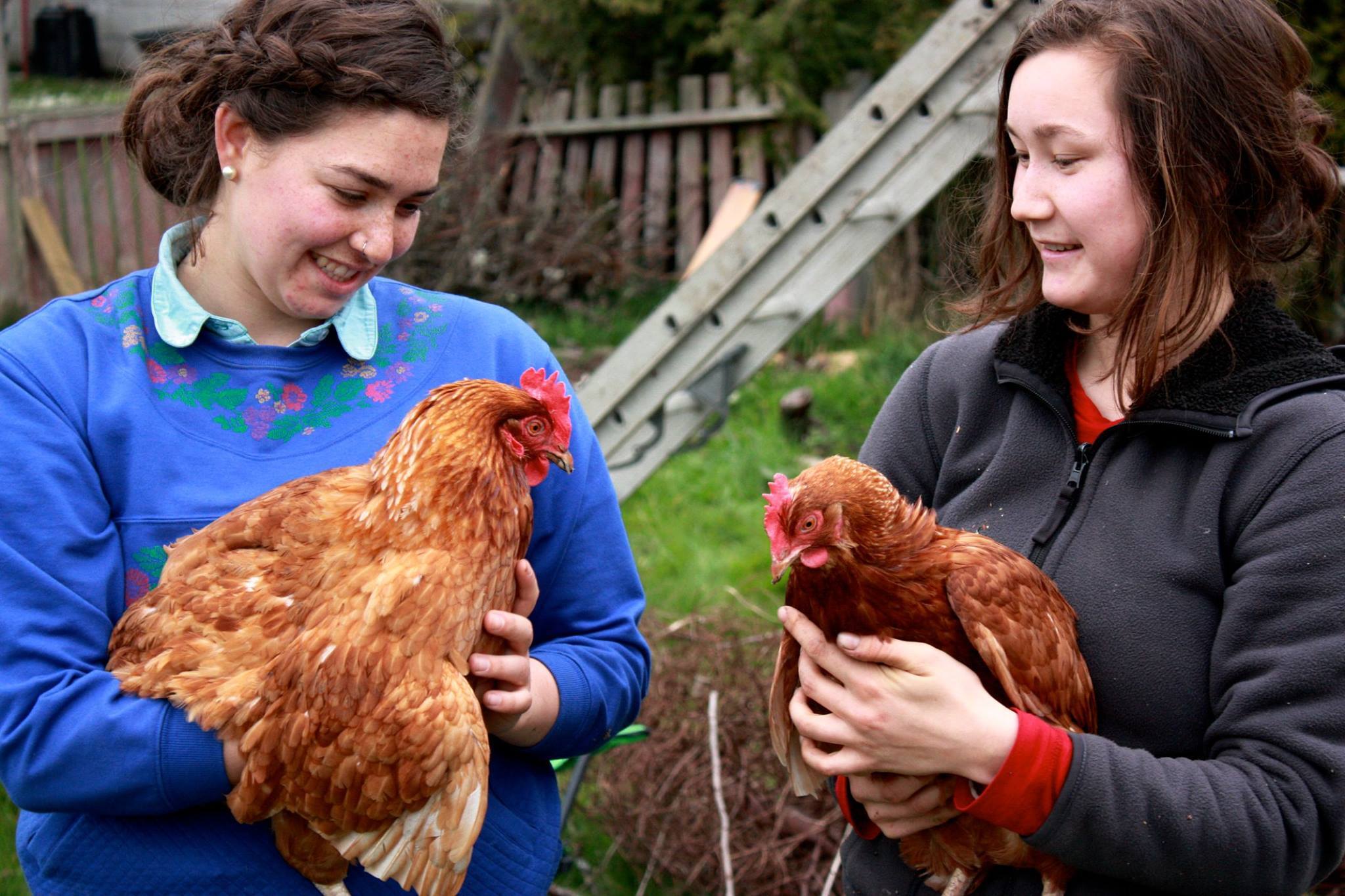 Our new pets arrived – 2 brown hens. We were thrilled! We greeted them with excitement and got them set up. We made sure they had food and water – they seemed pretty happy. We both naively headed off to school and hoped the birds would be alright.

When we got back, the birds were nowhere to be found. After looking around, we managed to locate them at the top of a tree neighbouring our yard. The 7-year old twin boys who lived next door must have noticed them in their yard and had considerately laid out a path of pop tart crumbs leading up to the tree along the fence in an effort to lure them down – to no avail. We ended up climbing up onto the fence and poking them down with a long branch until they flopped out of the tree, and ushered them back into our yard.

We learned that not only did we need a coop, but we needed a chicken run that they couldn’t escape from. Clipping their wings also helped prevent them from running away. We would attempt to improve the run periodically over the years when new materials would be available and new birds joined our flock. We also eventually kept muscovy ducks in addition to chickens. They turned out to be even messier than chickens, as their mini-pond had to be cleaned out regularly which created a muddy swamp.

We lost a number of unlucky birds to raccoons over the years, but this also provided an important learning experience for us. It was so gratifying to take care of these animals, eat fresh eggs, and just go and hang out with them. The responsibility felt important to me as I was a young university student in a new city.

The neighbours who helped us on the first day were inspired and decided to get a small flock of their own a few years later. I am no longer able to keep birds myself as I live in a large city and I miss the experience of caring for chickens and being connected to animals in that way.

Did u catch our latest 🎧 Ep, “Resurrection”? This story was cut for time - but too good not to share. Woolly mammoth project lead @geochurch tells us about his connections to @JurassicPark incl how he discovered his work was part of the storyline + what Crichton got wrong. 🧐