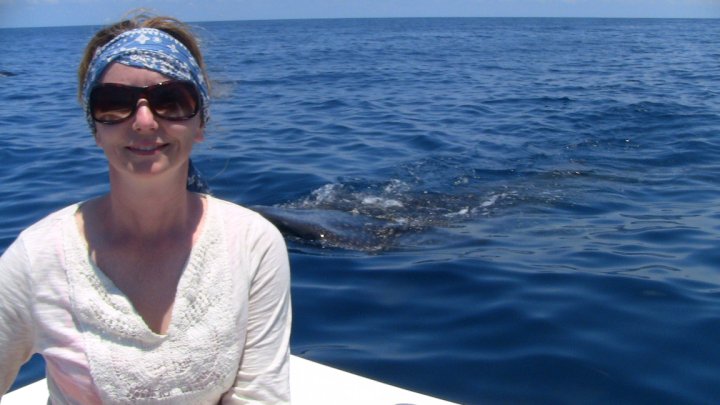 Anthropomania’s Executive Producer and Showrunner Frances MacKinnon worked for Discovery Channel for over a decade, where she directed and produced nature documentaries. She shared about an extremely lucky encounter filming sharks in Mexico.

What was your most memorable experience working on the set of a nature documentary?

One of my favourite experiences was filming whale sharks in Mexico for Discovery Channel. Every summer, thousands of whale sharks migrate to the Yucatan Peninsula region, but of course it’s impossible to predict the exact timing of when it will actually happen.

Our initial plan was to accompany Raffa, a local marine biologist who had been studying and tagging the sharks for years, however, our timing was off. June is early for whale shark season. While our hopes were high, there had been no sightings of the worlds largest fish since the previous year.

We had barely two days to capture the story, and knowing our dilemma, Raffa had been asking local fishermen and his network for sightings. So far: no sightings. He wasn’t optimistic we’d see anything, but decided to hire a small plane on the afternoon of our first day to see if there was any evidence further offshore.

We took off in a tiny plane from a tiny island airport and after about 30 minutes, with our hopes dwindling, the pilot and Raffa started yelling and pointing out the window. Directly below us in the crystal blue Caribbean water were hundreds of whale sharks creating a cascade of white caps, making their way to their summer feeding grounds. It was a magnificent sight. We were the first to see them and we couldn’t believe our luck.

At sunrise the next morning we hopped in a boat and made the two hour trip to locate them in the water. With the guidance of Raffa, we jumped into the sea and hung out with the giants, filming the sharks feeding and the biologists at work. It doesn’t always work out so perfectly, but it was a true ‘nature documentary’ experience.

What is something that you were surprised to learn when you first started being involved in nature documentaries?

In the midst of the stress and chaos of filming, I always felt that seeing wild animals up close, and getting to have real experiences with them was such a tremendous privilege. It puts your existence in perspective.

What is your favourite nature documentary?

So hard to pick, but My Octopus Teacher is definitely near the top.

Jay Ingram co-hosted Discovery Channel’s science show, Daily Planet for 16 years where he had many wildlife encounters while shooting footage. He told the story of an experience we might not consider when thinking about the process of making nature documentaries – where to sleep between shoots.

What is your most memorable experience working on a wildlife documentary?

Who says shooting wildlife stories isn’t dangerous? My most memorable experience working on a nature story for television was in Panama, where I and a Discovery Channel crew were shooting a story on wildlife rescue. Keeping monkeys as pets, or at least captives, had been pretty common in Panama, but the government had cracked down on the practice and we were documenting the capture and release of illegal pets. We’d taken a boat to a refuge in the Panama Canal where a variety of monkey species had been re-settled on islands, one species to an island.

It wasn’t the monkeys that were the issue though. Where were the four of us to sleep? On a sturdy wooden platform in the jungle apparently. No problem there. The platform was elevated about 4 metres aboveground, accessible only by a ladder propped up against a circular opening in the middle of the platform. An excellent safety feature – no jungle fauna could climb the ladder. There was just enough space on the platform for four of us to sleep. Just enough.

No problem there either, except where were the railings to keep us from tumbling over the edge onto the ground? Nonexistent. What would kill the unfortunate crew member who rolled off the edge? The impact, or the subsequent attack from some snake, spider or other imagined horror? Ensuring that wouldn’t happen meant avoiding sleep as much as possible.

We made it to morning, bleary-eyed, and the first two of our crew jumped in a canoe to traverse the waterway to the camp; the waterway populated, we were told, by caimans. Hey, we’re Canadians – we know canoes. So when they tipped and started floundering in the water, well, we feared the worst.

In the end, no jungle terrors at night, no prowling caimans. Sometimes the greatest dangers of shooting wildlife documentaries exist in our heads.

Listen to our episode “Bingeworthy: Are Nature Documentaries Good for Nature?” to learn more about the process of making these films!

Did u catch our latest 🎧 Ep, “Resurrection”? This story was cut for time - but too good not to share. Woolly mammoth project lead @geochurch tells us about his connections to @JurassicPark incl how he discovered his work was part of the storyline + what Crichton got wrong. 🧐